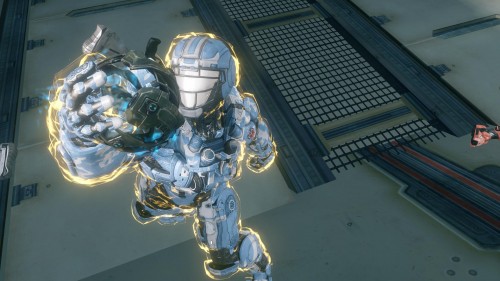 So Domion used to be my favorite Halo 4 gametype. It was well populated, and perfect for when you only had six friends on, instead of playing the lottery and picking up two quitters/betrayers/morons. Enter Lockdown and a few weeks later Dominion is taken out of the playlists due to lack of population. Then we are given a sweet ray of sunshine called Ricochet, and it had become my favorite gametype. So what happens in fairly short order? Another crazy, Action-Sack gametype, Shotgun Ricochet, is added to the mix and crammed down our throats by being slotted in first place for votes. This gametype was voted on by people who frequent Halo Waypoint forums. One has to wonder if this is a true representation of the population of Halo 4. Regardless of whether or not the masses enjoy it, I most certainly do not, and not only has this gametype ruined the joy of Ricochet for me, but some of the new maps that we’re being forced to play Ricochet on are horrendous for the gametype.

Ok, I’ll be the first to admit that it’s about time community content was added into Halo 4 playlists, but I’ve been running customs for several months now, and I don’t understand who is making these decisions on what maps go into War Games, because the maps I keep seeing in there remind me of the type of crazy customs I prefer not to join in on. Not only that, I’ve seen some extremely quality Halo 4 Forge maps, both aesthetically and functionally, that create good competitive fun. I also know for a fact that many of these maps have been submitted for the Halo 4 playlists. And yet what turns up in matchmaking is, in my opinion, sub-par. I don’t get it. Who is making these decisions? Why aren’t the most talented map-makers’ maps being showcased by Halo Waypoint?

Add to that this decision to put some maps in the Ricochet playlist that are difficult to navigate, overly-complicated, and too large for Ricochet. To me they just don’t play well, they play like bad customs.

If you are having a similar experience with the new Ricochet playlist, please make your opinion known at Halo Waypoint. These maps were chosen because the people who are getting involved and speaking up like this kind of stuff. Waypoint is not going to know how unhappy some of us are unless we make it clear in their feedback forums that we are not enjoying decisions like this. Let’s not assume our feedback doesn’t matter: if you don’t like it, please let them know. The more voices that speak up, the more that will follow, and the more we’ll be heard. Here, I’ll go first…