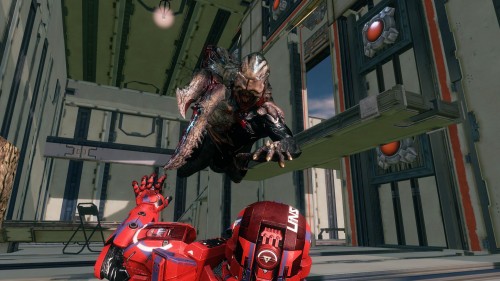 When rumors were abound prior to the release of Halo 4, one of the fantastic ideas I’d come up with was a versus mode, where players would be allowed to choose which type of Flood they would be. Imagine my disappointment at learning that not only had Flood gameplay not been given much to set it apart from what people were doing in customs already, all the Flood looked EXACTLY alike, AND they didn’t even look like Flood!! Add to that the annoying rabid-donkey-bred-with-a-gunieau-pig sound the Halo 4 Flood make, and I was going to be even less likely to play Flood than I had been previously.

But what’s this?! Someone has had a similar fantastic idea, and a Halo 4 custom gametype mod has been created that not only allows players to choose different types of Flood similar to Left 4 Dead versus, like a Battlefield 4 medic you can even “heal” your teammates when they’re infected by a slow-infecting Flood!

The gametype also includes other features such as being able to scale objects and make objects disappear when a Dominion base is taken.

Check out the details in this video by 0iah.