by CHa0s on November 4, 2013 in For Your Amusement, It's not Halo, Special Interest, Top Stories • 0 Comments 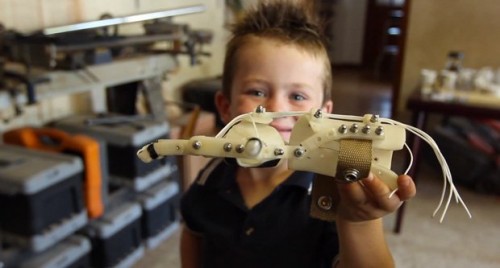 Liam with his RoboHand

Remember when we covered the 3D printers? Halo Diehards News Team member, EdieKaye, posted a newslink this morning that shows the extent these nifty gadgets can be used to change people’s lives.

Apparently, it would cost tens of thousands of dollars to get a prosthesis that would allow a boy without fingers to have a functional hand, but today a couple inventors have designed one you can make for $150 – provided you know someone with a 3D printer, which you can purchase for as low as $2,000.

The concept started when Richard Van As of South Africa lost four fingers in a sawing accident. He had seen inventor Ivan Owen on YouTube, showing off one of his mechanical special effect hands, and was attempting to build himself one. Richard contacted Ivan for help, who jumped on board to help create a working prototype. The pair started a fundraiser to design a working hand not just for Richard, but so they could make the design available to the world – for free! Makerbot, a company that produces 3D printers, got onboard and donated two of their units to the cause.

The Robohand is built with 46 parts, sixteen of which are printed out on a 3D printer. The other parts include such items as nuts, bolts and the nylon cord that allows the fist to close. It also includes rubber thimbles, which work great for grippy, finger surfaces. The hand grips by wrist movement, as seen in the video below.

Richard and Ivan than went on to design a Robohand for Liam, a five year old in South Africa, who received the hand for his birthday. Another boy, Leon, was born without fingers, and his dad, Paul McCarthy, built him a hand using the free design. Leon is proud of his new hand, and refers to himself as a cyborg.

Ivan Owen, the designer of the special effects hand that inspired RIchard to build one for himself, has also invented a mini-hovorcraft for his young daughter to use down the halls of their house.

Somebody break out the cool dad awards! These guys are awesome!!

See the Robohand in action, Ivan’s hovercraft, and one of Ivan’s Gauntlets in the videos below.

Boy gets prosthetic hand made by 3-D printer