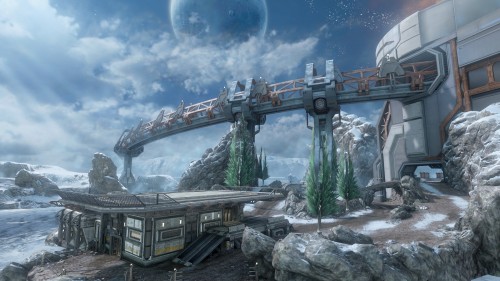 Did you know that it would take far less money to send ships into space via a rail-cannon than it does for the thousands of gallons of fuel it takes to escape the Earth’s gravitational pull? Halo 4’s Longbow cannons are just that, built to shoot cargo into space.

Ever since I’d read of this concept years ago, and that of the sky elevator like what was seen in the Forward Unto Dawn mini series, I wondered if I’d ever see it put to use in my lifetime.

For this reason, Longbow holds a special fascination, and touches a part of wonder in my imagination. Just look up into the sky sometime, see the depth and beauty, and imagine what it would be like to get shot into the dark, to go explore.

Recently, while searching images for a design project, I stumbled upon some concept art of Longbow, by Certain Affinity’s Lead Concept Artist, Bradley Jeansonne. In his post, he informs us that the power house of Longbow is called a “mass driver control station” – neat! Next time I’m on Longbow I’ll have to check it out in more detail, realize there’s really a whole power station in there that shoots the cargo through Longbow’s “arms”. Of course it wasn’t ever designed (well who knows, it might be…), but now I know someone imagined it, that the artists had it in their minds, and it’s more real.

Longbow’s accelerator arm designs were originally drawn in a straight line, instead of the graceful curved, longbow-like design that we see today, and early designs had the arms held up by wires, like the Golden Gate Bridge. 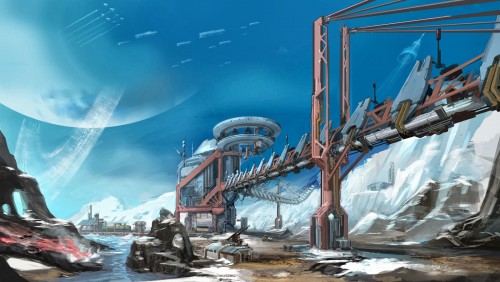 Initially, Longbow was called “Gore Valley”. One can assume the name change came when the design of this electromagnetic catapult changed to the sweeping bow shape, and lent it to this nickname. At one point the map design even had the mass driver pointing backwards, as seen in the concept above.

Very cool artwork! And neat to see some of the stages the artists went through in creating this map that has become a staple in our BTB War Game-play.

To see more images of the concept work on Longbow by Brad Jeansonne, head on over to his blog, PotentialThings. He’s also got some really neat work on Crimson Alliance and an MMO, Tabula Rasa. Extremely talented artist, fantastic work!