by HD Admin on May 13, 2013 in Community, For Your Amusement, Halo Diehards Spotlight, Halo Fan Art, Top Stories • 0 Comments

I’ve pretty well immersed myself in the Halo game and story, and one of the things I like the most about the experience is there’s always something new, some detail or community or way of expressing the fondness that so many have for the games and story. One area of the Halo universe I’ve never had the opportunity to explore is that of Halo on the PC.

Our next guest has taken his fascination of the Halo story to a new level, following the urge to create from making maps in the PC game, to developing mods, to finally creating his own cutscenes and mini-movie films of Halo campaign incidents never before seen in game or film. Please join me in getting to know 343thesentient, fellow Halo fan and computer graphics animator.
~CHa0s 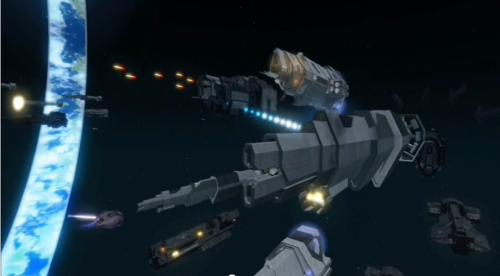 Thanks for the interview opportunity! I had heard about Halo since it came out, but my interest actually really peaked in 2009 (my high school years :P)

Someone put the Trial of Halo PC on the student share drive, which led to endless matches of good old Bloodgulch Slayer during computer classes and lunch. After a few weeks of these matches, I thought it would be clever to change the needler projectiles to rockets and add a cheap hidden teleporter so I would have the advantage. Of course once I got going, creativity got the best of me and I ended up making elaborate maps and mods. The 16v16 internet matches didn’t hurt either, and before I knew it I was pretty hooked on Halo.

What got you started making Halo CGA’s?

I signed up with the HaloDemoModding community under the name “AID” and made 25 multiplayer maps over the course of a year or two. Like many other fans, I wanted to add my own story elements to the Halo universe, but instead of going along the course of machinima and fan fiction, I made my own mod series that I dubbed “ONI Section 0”, totaling 7 large story maps. I started my Youtube channel back in 2010, to showcase mods I liked, and eventually speedruns and gameplay of ONI Section 0.

There was one flaw to that mod series – there was no way to make cutscenes. To change the map, players had to close down Halo Trial and switch the map to the next level, and it was impossible to smoothly integrate cutscenes into the experience. So I looked for fan-made halo animations and integrated it with the gameplay to make a “movie” of sorts. 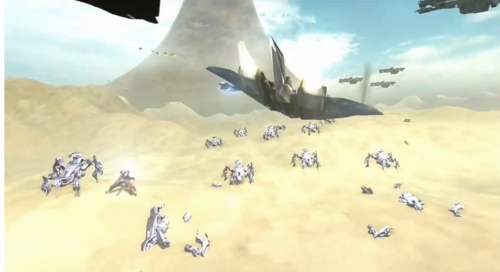 Screenshot from 343thesentient’s “The Sacred Icon”

After taking a 3d animation class over the summer, I got the idea to make my own Halo animations. The only problem was something like 3ds Max or Maya can take hours to render. Most animators have the patience, but I got incredibly annoyed at the render times at one point and almost gave up. I was playing around with Sandbox 2 at the time, the engine that Crytek used to make Crysis 1 and Warhead. I quickly found out how I could combine my passion for making maps and animations, and pumped out my first animation, Flood Origins, in under a month.

How long does it take to make one?

Thats a great question – it really depends! I group my animations into two categories: Story Animations, and CG Animations (for lack of a better term). CG animations are usually between 2 to 4 minutes long, while Story Animations have taken from 6 to 12 minutes. Obviously longer animations take more time to produce.

So I’d say around two weeks on average :)

Have you done other CGA projects?

I’m a “free freelancer”, so I take on a lot of external projects, mostly from machinima developers. The largest project I’ve taken on is Starwars vs Halo. I made two large-scale trailers and made high-res textures for the game.

Also just a side-note, but I’m glad you call them CGA :) Most people group all computer generated content under CGI, but thats the stuff that Micheal Bay does – overlaying CG images on top of real footage.

Do you do other kinds of art?

I’ve tried drawing, but it hasn’t really clicked with me. I like drawing concept cars though! And I’m all right at drawing a banshee.

Which video that you’ve made is your favorite? Why?

My favorite is probably the Call to Arms II short. The recent Sacred Icon short gets a close second. I really like how fast-paced they are and how well they turned out.

What inspires you to make part of the Halo story, how do you choose which part to do?

I’d say the books and cutscenes are what inspire me. Greg Bear’s Cryptum inspired me to make Flood Origins, while Eric Nylund’s Fall of Reach inspired the Keyes Loop.

The short cutscene of Master Chief blowing up the Covenant Cruiser in Halo 2 made me realize that there should be much more there, which is where the Battle of Earth came from. And one of the Halo Wars cutscene seemed bland just talking about the battle instead of showing it, which led to that animation.

How is CGA made? (what are the basic steps involved)

The first step is making a scenario. In my case I make a map in Sandbox 2 and add scenery (military base, mountains, background spaceships, etc.).
Then I see if the story I am trying to portray needs models that aren’t already in my databank. For example, in the recent Sacred Icon CGA short, I had the scarab and longsword models, but all the halo 4 content (mammoth, infinity, etc.) had to be imported.

After Importing and placing the models I need, I fly around the map in free cam mode to find good angles and camera shots for the intro. Once I have a good sequence put together and animate the vehicles/characters, I add additional details like clouds, particle effects, cinematic dust, time of day, etc.

The final step is recording. Because Sandbox 2 has real time rendering, I can just use software like Fraps to record a sequence and then go on to the next one :)

Is there anyone who has inspired you to create the videos?

A few people have been working on a halo conversion with cryengine, which inspired me to keep working with cryengine. Also, Marty O’Donnell, who made the music for Halo up until Bungie left, has inspired me a lot. I actually use most of his music in my animations. He was also a next door neighboor back when I lived in Washington :D

Are you or do you have plans to go into  the field of computer graphics animation?

I think it would be really fun! I’m hoping to take some college classes on it to see if its what I really want to do, but right now its mostly a hobby.

Do you play Halo?

Yep! Played every one including Halo Wars. Halo 2 is probably my favorite.

What’s one of your favorite Halo memories?

Halo 2, the level where Master Chief fights through High Charity against both Covenant (and the flood).

What other experiences might you have had in regards to Halo?

I really liked watching the Halo Wars Cinematic with 3 spartans vs elite honor guards, it was just purely epic. The Intro to the flood in Halo 1 with Private Jenkins was also really well done, and the nostalgia feels great.

The Midnight level in Halo 4 was one of my favorite moments in the franchise, when it opened and I was flying the shortsword with the HDR flares across the Didacts ship… and if it couldn’t get better my favorite Halo 4 song 117 was playing… 343i got me there. I made some unrecongizable vocal sound that may or may not have been a high pitched scream.

Yeah! I just wanted to let everyone know how happy I am to have contributed to the Halo community. I try and make an animation every month, and I apologize for those months when I wasn’t able to make any, I’ll make it up soon :)

Also here’s the link to my HDM profile that I talked about
http://halodemomods.com/wiki/User:AID

Wow, that’s quite a story! It’s always neat to get to know other artists and creative people who have expanded their talents exploring the Halo story. And what a coincidence that he lived next door to Marty O’Donnell – – I wonder if Marty knows how much he’s inspired others to “reach for the stars”. Thanks, 343thesentient, for sharing a little bit about your world, and for those who’d like to see more of his visions of the Halo world and some more of those scenes that have never been seen but should’ve, check out his YouTube page. Don’t forget to subscribe so you get notified when he makes more!
~CHa0s