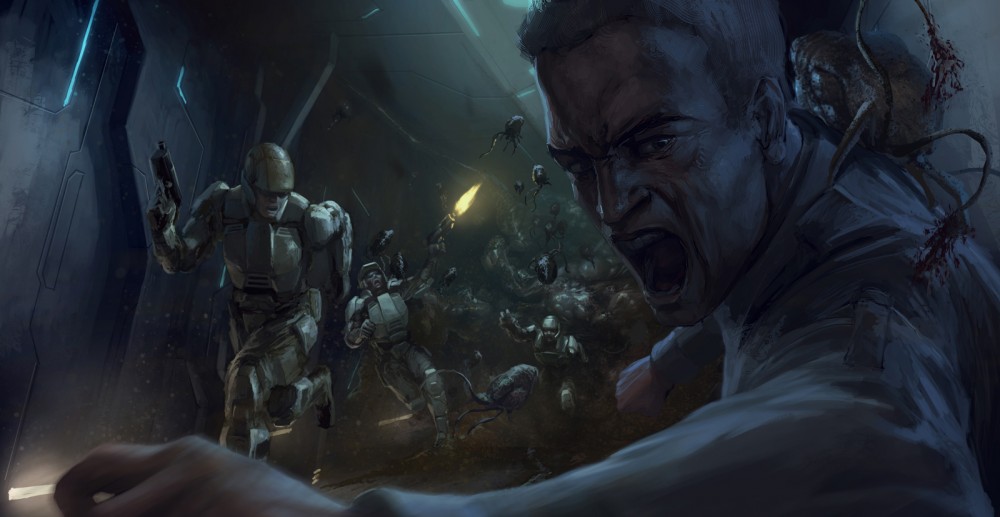 The Flood, you know what it is and what it does, but do you really know its origin or how it shaped the galaxy?

Known as the Flood by humanity, the Parasite by the Covenant, and designated as LF.Xx.3273 by the Forerunners, this organism is devastating to any sentient life of sufficient biomass it comes in contact with.

The Flood originated as a genetically modified form of the Precursors. It was created when the few remaining Precursors that survived the Forerunner uprising transformed themselves into a dust like substance that was meant to allow the Precursors to be reanimated at a later time to exact their revenge on the Forerunners.

Over millions of years, the dust deformed and turned into a disease-like substance. Ancient humans came in contact with the powder when they discovered a starship crash and thousands of glass tubes filled with the substance at the edge of the galaxy. They began to study the material and concluded it to be harmless but also saw that it caused psychological changes to a domesticated animal known as Pheru.

As the animals were continually being exposed, their behavior became very docile but unknown to the humans, it was also changing the genome of the Pheru. Later, Pheru began developing furry growths and fleshy protrusions. 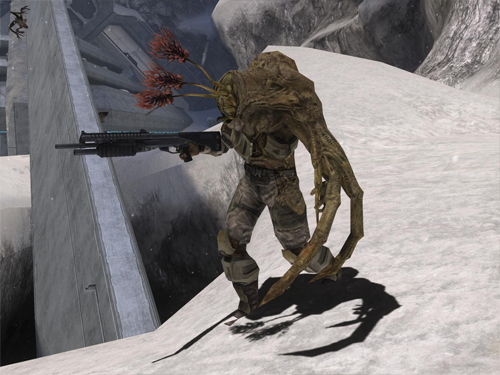 Soon after, humans began to exhibit some of the same effects. As the infestation grew, the disease that was mostly psychologically altering was beginning to reform people who came in contact with it. Many early forms of the ones we are familiar with began to develop. Gathering forms, combat forms, and forms to consume resources necessary for reproducing were the first types of Flood.

The Flood still had the Precursors’ plan to get revenge on the Forerunners in mind. Due to the Human-Flood Conflict, humanity was forced to expand into Forerunner territory, causing tension between humanity and the Forerunners.

Once the Flood had receded, human resources were spread thin and were quite susceptible to the might of Forerunner forces led by the Didact.

The Forerunners eventually destroyed humanity, devolving the remaining genome and effectively reducing mankind to a prehistoric state, and erased any signs of human achievement in the galaxy. Most of the Forerunner people were unaware of the threat that the Flood posed, and others thought it was just an excuse for humanity’s rapid spread throughout the galaxy.

High ranking Forerunners were informed of the very real threat of the Flood and two options were proposed; either follow the Warrior-Servant Didact and perform a series of military campaigns or listen to the Builders and make an array we know as the Halos.

The Flood reappeared and for many years the Forerunners tried to fight it off. The Forerunners underestimated the Flood and when it began to gain traction and take world after world, the Flood began amassing more and more knowledge. Gravemind types began to form and the tactics the Flood used against the Forerunners became greater and greater.

As the Flood continued to spread across many systems, it’s knowledge continued to grow. Types known as Key Minds, planet-sized Flood collective intelligences, were forming on many infected planets. These intelligences surpassed any Forerunner AI constructs and would eventually turn Mendicant Bias against its creators.

Due to the Flood’s Precursor origins, it developed the use of neural physics which allowed the acquisition of Precursor star roads. The use of star roads would be pivotal for the Flood against the Forerunners.

Star roads were massive constructs that could change its mass and were used by the Precursors for travel as they connected planets and even entire systems throughout the galaxy. The Flood weaponized them and used them to form structures that could disrupt slip space travel and entrap Forerunner fleets. 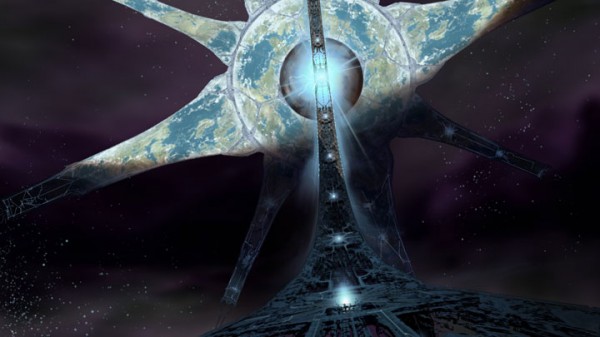 Installation 00, Ark as seen from one of it’s Halo’s

The Forerunners were unable to contain the Flood infection, as it was growing exponentially, and were forced to use the Halo Array. Before the firing, a conservation initiative was enacted to archive all species within the galaxy and store them safely on the Ark, an extragalactic installation, until the reseeding of the galaxy by Forerunner AI constructs.

The Halo Array would destroy all sentient life and neural structures (star roads), starving the Flood and inhibiting travel. The only remaining Flood specimens were stored in containment facilities on Halo installations and some Shield Worlds.

Installation 00, Ark as seen by Master Chief in the Library in Halo: CE Anniversary

Editor’s note: want to learn more about The Flood? Check out the resources in this Halo Diehards article, “Halo in Depth: The Flood“. There’s even Flood transformation video footage there!

← What do you get when you Mash Destiny and Halo? [Video]
Check out these Halo PC maps for Master Chief Collection! →