A Brief History of Halo: Mantle

Get caught up on the history leading up to the present in the Halo story before Halo 4 drops! This series is authored by Urban Reflex, who originally posted it up over at HBO. We’ve highlighted it over here with permission for your use:

In the run up to the launch of Halo 4, I wanted to do something to refresh not only my memory, but that of the community as well. It’s been eleven years, and a lot of things have happened in the Haloverse in that time. It’s been five years since we last had any contact with Cortana, or John.

So I’ve trawled the archives of Halopedia.org, and I’ve pieced together this. It’s not complete, but it’s not designed to be. My goal is to cover the major events, setting the scene for when evil awakens in two weeks time. I hope by then that your memory is refreshed, and ready.

It all begins with a race of beings known as the ‘Precursors’. They are those that came before the Forerunner, that seeded the galaxy with life, and from whom originates the responsibility of the Mantle. Little else is known.

Having the foresight to realise they would not be around forever, the Precursors were seeking one of their creations to protect the work that they had started. This species would be charged with the care of all living things in the galaxy; required to protect them and encourage growth. This task was the Mantle.

The Precursors would test many species to decide whether they were worthy of taking on the Mantle. If found to be “problematic”, that species was then eradicated. Upon discovering they had failed this test, the Forerunners rose up in arms against their makers to prevent their own destruction. They succeeded in annihilating all but a small number of Precursors, who fled beyond the galactic rim.

But not before they could enact one final plan.

Time passed – millennia upon millennia; and to all Forerunners the war against their creators was long forgotten. Reverse-engineering technology the Precursors left behind, they expanded. Now inhabiting millions of worlds, the Foreunner empire became known as the ‘Ecumene’.

It was also at this time that other creations of the Precursors would evolve and flourish; most notably humanity. Mankind grew to colonise several thousand worlds, eventually encountering and forming an alliance with the technologically-superior San ‘Shyuum. The planet Charum Hakkor was chosen as the capital of this alliance, mostly due to the high number of Precursor artifacts found there.

During an expedition to a planet at the edge of the galaxy, humanity discovered a being trapped within an ancient stasis capsule. Upon returning with it to Charum Hakkor, the captive was then plied with questions by the researchers. It’s answers were vague, and unhelpful, leaving humanity to only guess at the creature’s origin or purpose.

Some time later,
Humanity discovered the wreckage of several apparently automated vessels, and an unknown powder amongst the cargo. This powder initially seemed to be useless, but when applied to the domesticated ‘Pheru’ seemed to encourage desirable physical and behavioural traits. Over centuries however, the animals began to exhibit cannibalism, still births, and mutations.

As Pheru were popular with both human and San ‘Shyuum alike, individuals from both species who spent time in close proximity with the animals started to suffer from the same symptoms. They developed tentacle-like appendages, fleshy growths, and other deformities. The Flood outbreak was in full swing.

Planet after planet was lost to the disease. In desperation, the humans genetically altered a third of their population with genes designed to combat the Flood cells. This part of the population was then “fed” to the Flood, the altered genes destroying the infection and giving humanity a costly victory against their foe.

During the war, the humans aggressively took control of other worlds to replace the ones it lost to the Flood. This brought the alliance into direct conflict with the Forerunners – who perceived this rapid expansion as going against the teachings of the Mantle. As a result, humanity also found itself at war with the Forerunners.

After the narrow victory over the Flood, the human-San ‘Shyuum military was at breaking point. They were pushed back to and cut off at Charum Hakkor, thus beginning a fifty-year siege. The Didact, commander of the Forerunner fleets, eventually led his forces to triumph; spelling the end of the alliance’s interstellar empire.

Upon learning the reason for humanity’s desperate invasions, the surviving humans had their memories extracted by the Composer. In doing this, it was hoped that these memories would hold the key to defeating the Flood should it ever one day return to the Milky Way.

As punishment, both human and San ‘Shyuum were reduced to levels of sub-interstellar technology. The entirety of both species’ populations was restricted to their respective homeworlds, and their civilisations fractured and divided; ensuring they could never threaten the Forerunners or the Mantle again.

The Didact and his Promethean warriors discovered the captive in it’s stasis capsule on Charum Hakkor. It told them that it was the last of the Precursors, the last of those that the Forerunner rose up against and destroyed. The Didact chose to share this information with no one; save his wife, the Librarian.

In response to the threat of the Flood, two defenses were simultaneously developed over the next ten thousand years. The Didact proposed a series of “shield worlds”, designed for quick response military reaction should an outbreak be detected. In opposition, the Master Builder suggested an array of super weapons that would deny the infection sufficient biomass to spread.

The Librarian, however, petitioned the Ecumene Council that these super weapons would be an affront to the Mantle. She was successful in convincing the council to allow the surfaces of these installations to provide a safe haven for the specimens of the Conservation Measure – The Librarian’s plan to reseed life throughout the galaxy in the event the array was activated.

So it came to be that the Forerunners had both offense and defense against the Flood.

Two separate arrays of the super weapons were constructed: The original twelve rings of 30,000km diameter, under the explicit control of the Master Builder; and watched over by the Librarian, six smaller rings 10,000km in diameter. In far greater numbers were the Didact’s shield worlds, bunkers of warships and shelter spread throughout Ecumene space.

Eventually, the Didact and his Prometheans would lose control of the council to the Builders. The Builders then either executed the Prometheans or forced them into exile. The Didact chose the latter fate for himself, and thus that is how he spent the next thousand years. 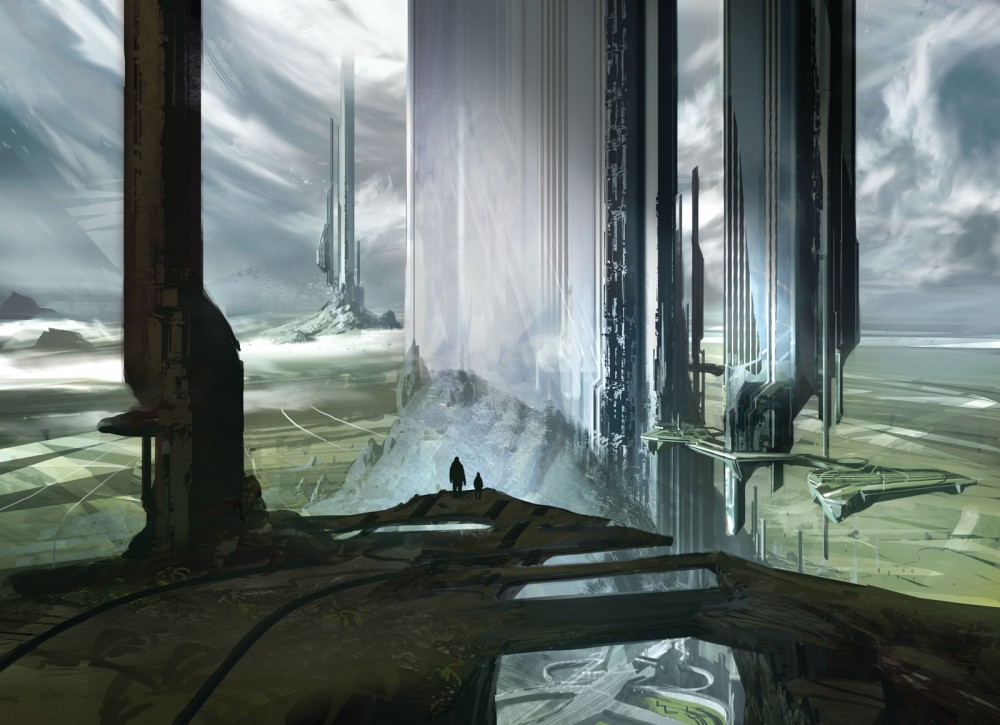