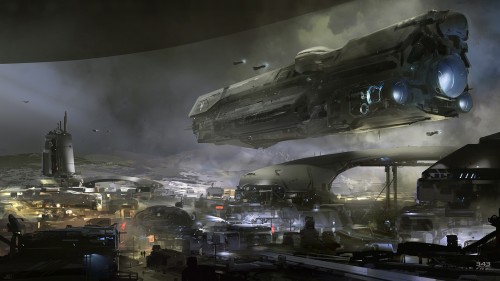 Josh Holmes let Halo fans know about some changes that will affect the outcome of ‘Halo 5’ in the latest Waypoint Headines blog post. Amongst promises of more details soon, and a disturbing mental image (or not…) of Kenneth Scott Skyping in his underwear, we learn of some changes to the team that is working on the next installment in the series.

Last year it was announced that Tim Longo had joined the team, taking Josh’s role of Creative Director, as Josh moved to Executive Producer at 343. In the post, Josh explains how he had a vision of the type of person he needed to fill this role, and that he really didn’t think that person existed.

From the sounds of it, Tim fits the role quite well, and although the blog post doesn’t give much beyond praise, it is easy to feel hopeful to hear that he has “a mastery of game narrative and storytelling, a deep understanding of game mechanics, experiential design and aesthetic, with the ability to define a compelling creative vision and inspire a large cross-functional team to achieve it” as described by Josh Holmes.

Josh then goes on to mention that Kiki Wolfkill is working on something that will change the way we “experience Halo”, but doesn’t give us anything beyond that.

Perhaps one of the most exciting tidbits of news is that Nicolas “Sparth” Bouvier is taking over as Art Director, since Kenneth Scott is moving his family out of state and changing to art consult on the project. Sparth is known and loved worldwide for his amazing, surreal and beautiful artwork. There is something magical in his lines, the colors he chooses, the textures; something that inspires. “Fantastic” and “Beautiful” are words that describe his work, but alone they just fall short. Sparth’s art has to be ‘felt’ to be understood.

The concept art above was released in the blog post at Waypoint, and was one of the first pieces Sparth did in developing imagery for ‘Halo 5’.

It’s easy to assume there might be trouble in paradise with Kenneth leaving, but everyone is present in the blog post, seemingly with support for each other. We learn in it that Kenneth and Sparth have been working together for almost ten years, and are close.

343 as a company is still in the “adolescent” phase: they’ve bucked their parent (Bungie), rebelled (changed up a bunch of shit we didn’t necessarily want changed to signify their independence and autonomy), and proved to the world they can stand on their own two feet. The hope with many fans is that the next Halo will have more of a confident, mature feel across the board, regardless of what direction it’s taken in, with stronger common art styles and themes throughout.

We don’t get a lot of details about what’s coming, but it is intriguing. We’ll be watching with interest to see how it all turns out.

Hmmm… that is intriguing! Take me to Waypoint so I can check out the details and download Sparth’s art! >>

What was that Sparth art link again? I want to go to there… >>

Thanks, @iamclackout, for the heads up on the story.