Excerpt from The Halo Bulletin: 10.10.12, posted at Halo Waypoint by Bs Angel: 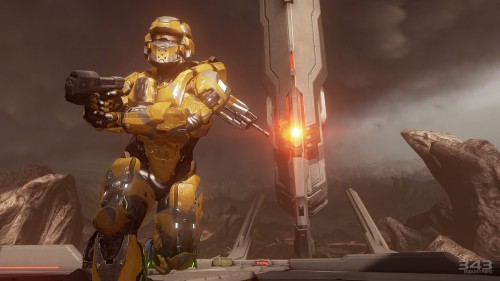 The UNSC Infinity is your gateway to the Infinity Multiplayer experience in Halo 4 and serves as the center of your Spartan career. Here you will build your custom Spartan-IV super-soldier, and progress your multiplayer career across both Spartan Ops and War Games modes. You’ll start your career as a Spartan-IV, with a limited amount of choices. As you level up, that will slowly unfold into a large amount of choices. The pace with unlocks will be regular, but not so fast that it causes confusion.

As you progress through your multiplayer career, you unlock items that allow you to build the character and experience you want. The things you really desire, such as the Battle Rifle and DMR, you’ll gain access to fairly quickly. Some of the more difficult choices you’ll face, such as which Specialization to tackle first, come later. All of these things give you the ability to tailor your experience and focus on your favorite parts of the sandbox more than ever before.

How quickly you progress through your career will partly depend on your skill. Skilled players will rank up faster, as you get more XP for winning matches. It’s also worth noting that quitters do not get game completion XP. They can progress commendations and challenges, but they will not get partial XP at the end of the game (AHEM).

Below is a breakdown of the Halo 4 progression system.

When you first enter Infinity Multiplayer, you automatically enlist into the SPARTAN-IV program and begin your Spartan career. This career spans all of your gameplay in War Games, Spartan Ops, Forge and Theater.

New SPARTAN-IV recruits are issued the following gear:
• Assault Rifle
• Magnum
• Frag Grenade
• Recruit Armor, Emblem, Visor and Stance
Stances are a new customization option that let you select a pose for your Spartan on your Player Card. This card is seen in every multiplayer lobby in the game and is how your Spartan is identified outside of gameplay.

You will have to rise up through the Spartan ranks to unlock more gear and make your way through the SPARTAN-IV program.

Spartans begin their career in the base SPARTAN-IV ranks. There are 50 ranks to work your way through, from SR-1 to SR-50, unlocking gameplay and visual customization items as you rank up.

To rank up, you need to earn XP. You earn XP by:
• Playing War Games (earn more for winning and high personal score)
• Playing Spartan Ops (earn more for higher difficulties)
• Completing each level of a Commendation
• Completing Challenges
• Using Forge
At each rank, you will earn one or more Spartan Points (SP). SP are used to purchase gameplay items for your personal loadouts. Once you purchase an item, it can be used in any of your loadouts.

The Spartan Point system is based around offering choice at each rank. The full suite of gameplay items is available for purchase by SR-26 but you won’t have enough SP to buy everything until SR-50. It’s up to you to decide the order in which you want to build up the arsenal for your Spartan-IV.

We have default loadouts in our War Games playlists to give you a preview of these items before you reach those ranks, and to offer an alternative to your own custom loadouts.

Over the course of the SPARTAN-IV ranks, you also unlock four extra loadouts (at SR-6, SR-14, SR-26 and SR-41) for a total of five loadouts. You can rename these loadouts, so pick names that match the role or gear for that particular loadout.

Decades from now, when historians evaluate the war, what will they say about us? Will they claim that our victory was ultimately fruitless? That it failed to secure a lasting peace, or worse, that it was only a prelude to far greater horrors that now lay ahead?

All Spartan-IVs start out with the same Recruit look. As you rank up, this is reflected in the look of your Spartan, which is visible to other players in gameplay and every Multiplayer lobby.

Visual customization items such as Armor, Armor Skins, Weapon Skins, Visors, Emblems and Stances are unlocked through several means:
• Earning a specific SR rank
• Earning a specific rank in a Specialization
• Mastering a Commendation
• Completing a Waypoint goal
When you meet the prerequisite, you will gain access to the items automatically; you do not need to spend Spartan Points.

My hope – OUR HOPE – is that history would instead view this war as a catalyst. That the last thirty years were a crucible, a threshing floor for our species, sifting out our fears and frailties. And that ultimately it made us stronger and more vigilant in the end, fully prepared for whatever will come next. After all, what good is struggle if there is no change? What good is a fire if the sword is not made stronger?

Specializations are composed of ten levels each. As you rank up in Specializations, you will unlock new armor sets, emblems, visor colors, armor and weapon skins and armor mods – which provide even more options to customize your Spartan-IV to fit your preferred role on the battlefield.

All players have access to two Specializations at launch:
• Wetwork: WK-1 to WK-10
• Operator: OP-1 to OP-10
The rest, which are listed below, will gradually be made available in the months following launch. We will be keeping a close watch on player participation post-launch and will roll out the additional six Specializations when the player base reaches certain milestones. Purchasers of the Limited Edition and pre-orders in certain territories have launch day access to the remaining six Specializations – although you still need to complete the initial 50 Ranks before you can enlist in one.
• Engineer: EN-1 to EN-10
• Tracker: TK-1 to TK-10
• Rogue: RG-1 to RG-10
• Stalker: SK-1 to SK-10
• Pathfinder: PT-1 to PT-10
• Pioneer: PR-1 to PR-10
Other players will be able to see your overall progress through the Specializations by your SR rank. This keeps going up by one each time you earn a Specialization rank, all the way up to SR-130. There might be a reward or two waiting for those who hit SR-130!

Attached are four reports accounting the major contingency structures our species currently faces in the wake of the war. Please evaluate them closely. Their outcomes will dictate how history views us, or if history even views us at all.

Halo 4 features over 120 commendations covering a wide variety of activities (per weapon, per enemy type and per game type, for example). There are commendations based around earning specific medals, and we also have aggregators that require you to master multiple commendations to complete them. Commendations also have a variable number of levels.

Certain Commendations can award visual customization items when you master them. To master a Commendation, you need to have earned its highest level.

We see the Commendation system as the long-term progression with the most exclusive items. Most players will still be mastering Commendations well after completing the Specializations.

Like Commendations, Challenges have been expanded in Halo 4. We not only have daily content, but also a weekly and monthly cadence as well, giving players ample time to complete different challenges with varying levels of difficulty.

As Machiavelli once said: “the Romans, foreseeing troubles, dealt with them at once, and, even to avoid a war, would not let them come to a head, for they knew that war is not to be avoided, but is only put off to the advantage of others.”